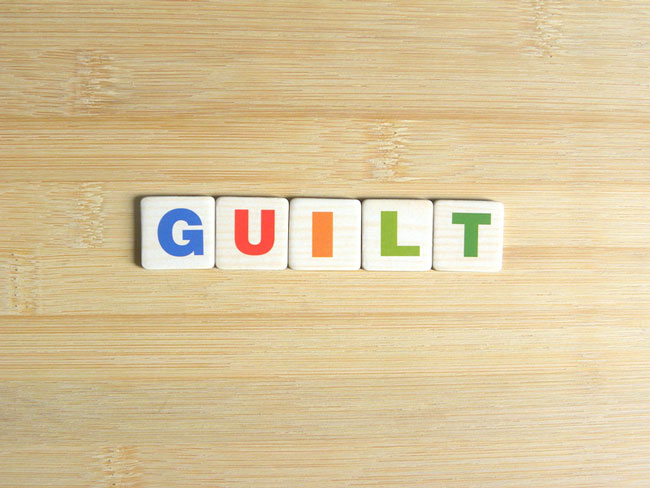 Human beings come wired to experience the emotion of guilt. It is appropriate to feel guilty when we cause harm to someone or something. This uncomfortable feeling is the body’s way of saying “I did something bad.” Appropriate guilt motivates repair. It creates the thought “I need to make this right.” When felt fully, guilt is also a deterrent for causing future harm. The emotion is uncomfortable and just like pain prevents people from touching a hot stove more than once, guilt makes people want to stop doing the behavior that caused it.

Pause for a moment to imagine a world where humans feel no guilt over wrong doing. Most people would not want to live in such a world because they can see that a guilt-free world is a world where people harm each other and destroy things and show no remorse for their actions. Guilt is an essential emotion that is meant to be felt, acted on and then released. At its core, it is a functional emotion.

Yet, when guilt is not understood or when it is misdirected, it can become problematic. Guilt that grows too big turns into shame. Dr. Brené Brown has spent decades researching shame and its consequences. A thorough discussion on shame is beyond the scope of this article. For further reading on the topic, try any of her published books. Her first book, I Thought It Was Just Me (but it isn’t): Telling the Truth About Perfectionism, Inadequacy, and Power (Penguin/Gotham, 2007) is a good choice for women wanting to understand more about shame.  Her second book, The Gifts of Imperfection: Letting Go of Who We Think We Should Be and Embracing Who We Are (Hazelden, 2010) is a short read that gives a good overview on shame and how to combat it in order to live wholeheartedly.

For the sake of simplicity, shame can be defined as what happens when the belief switches from “I did something bad” (guilt) to “I am bad” (shame). Rather than motivate repair, the voice of shame motivates people to hide from others and isolate. Shame takes away hope of repair and improvement. It leads to feelings of being unworthy and unlovable. This makes it difficult to keep enough motivation to keep striving.

When shame rears its ugly head, the most helpful thing to do is to recognize it for what it is with a thought like “I’m in shame” ride the wave of emotions that sweep over you and then reach out to a trusted friend or relative and tell the story of what happened. This is an example using a skill called opposite action. Shame says “hide, stay in the dark, you’re not worthy of love.” Rather than giving in and obeying the voice of shame, doing the opposite action of reaching out to someone who cares about you will help you move through shame and back into connection.

Another potential downfall when learning to allow guilt to become a healthy part of your emotional experience is the existence of inappropriate guilt. Inappropriate guilt is when a person feels bad about something that is not his fault. This is a common problem; children are especially prone to responsibility for things that were beyond their control. One example is a child feeling guilty for her parent’s divorce. The child may be under the false impression that if she would have not picked so many fights with her brother her parents would still be together.

Another example of inappropriate guilt is when an adult feels guilty for having cancer. Self-talk in this situation may sound like “This is my fault. I should have eaten more salads and exercised more.” Inappropriate guilt is not helpful because it leaves the person experiencing the guilt unable to correct the perceived wrong. For example, the child cannot make her parents get back together. The man with cancer cannot cure himself. In these instances, the appropriate emotional response is self-compassion which will be discussed in a future post.

There are many ways to help yourself or your child learn to let appropriate guilt do its job. Here are a few suggestions:

Identify the behavior. Get clear about what you did that was wrong. Journaling about the situation may help with this. Come from a place of seeing yourself as a good person who acted outside of your values rather than as a bad person (shame) who can never change. It can actually be empowering to admit “I was not my best self in that moment.”

Offer a sincere apology. A sincere apology can go a long way toward correcting a problem. Sincere apologies are not done in anger or resentment. They do not contain “buts.” For example, stay away from saying things like “I’m sorry I yelled at you, but you make me so mad I can’t control my temper.” Acknowledging that what you did was wrong regardless of the circumstance is important. Sometimes simply stating “I shouldn’t have done that” helps with this.

Practice empathy. If it’s difficult for you to be sincere in your apologies, try putting yourself in the other person’s shoes. Can you see how what you said affected her? Can you see why he was upset with what you did? Taking the time to see the situation from another person’s viewpoint will reduce defensiveness.

Take appropriate action. Rather than becoming stuck by ruminating on what you did wrong or what you wish would have happened, ask yourself “What can I do about it now?” Take whatever corrective action you can. Sometimes you do not know how to make it right. Sometimes asking the person you hurt “What can I do to make it right?” will give you a forward direction.  Do the things that are within your power to correct the problem.

Let it go. Once you have examined your behavior, identified what you did that was wrong, taken accountability for it and done what you could to repair, guilt has done its job and its time to let it go. Holding on to guilt for long periods of time in the spirit of wanting to punish yourself enough that you will never make another mistake will actually make it harder for you to feel appropriate guilt. You want your internal system to know that you can recover from mistakes and that making a mistake does not mean you have to punish yourself excessively for long periods of time. When your system can trust that guilt is a safe emotion to feel, you will increase your ability to acknowledge wrong doing.

Once you understand the purpose of guilt and you have had some successes in letting it do its job, it’s time to help your children do the same. Adults need to help children navigate guilt by focusing on the behavior that was wrong rather than focusing on defining a child’s character. Telling a child “It’s not ok to hit” is more helpful than saying “You are so mean.”

Remember, children will learn to handle guilt not just from what you say, but also (more importantly) by watching what you do when you feel guilty. Set a good example by admitting when you do something wrong, taking appropriate action to correct the problem, then letting the guilty feeling go.

The blog posts shared on www.childpsychologistutahcounty.com contain opinions of the specific mental health specialist who authored the post, and do not reflect the opinions of any organizations or affiliates.  While the therapists in this clinic are all trained professionals, all blog posts on this site are for informational purposes only, and are never a substitute for professional advice catered to your individual needs.  Neither Child & Adolescent Treatment Specialist, nor any of the contributing therapists are liable for any diagnosis, treatment plans, or decisions made based on the information presented on this website.  This blog post in no way constitutes a therapeutic relationship.

DISCLAIMER: The blog posts shared on www.childpsychologistutahcounty.com contain opinions of the specific mental health specialist who authored the post, and do not reflect the opinions of any organizations or affiliates.  While the therapists in this clinic are all trained professionals, all blog posts on this site are for informational purposes only, and are never a substitute for professional advice catered to your individual needs.  Neither Child & Adolescent Treatment Specialist, nor any of the contributing therapists are liable for any diagnosis, treatment plans, or decisions made based on the information presented on this website.